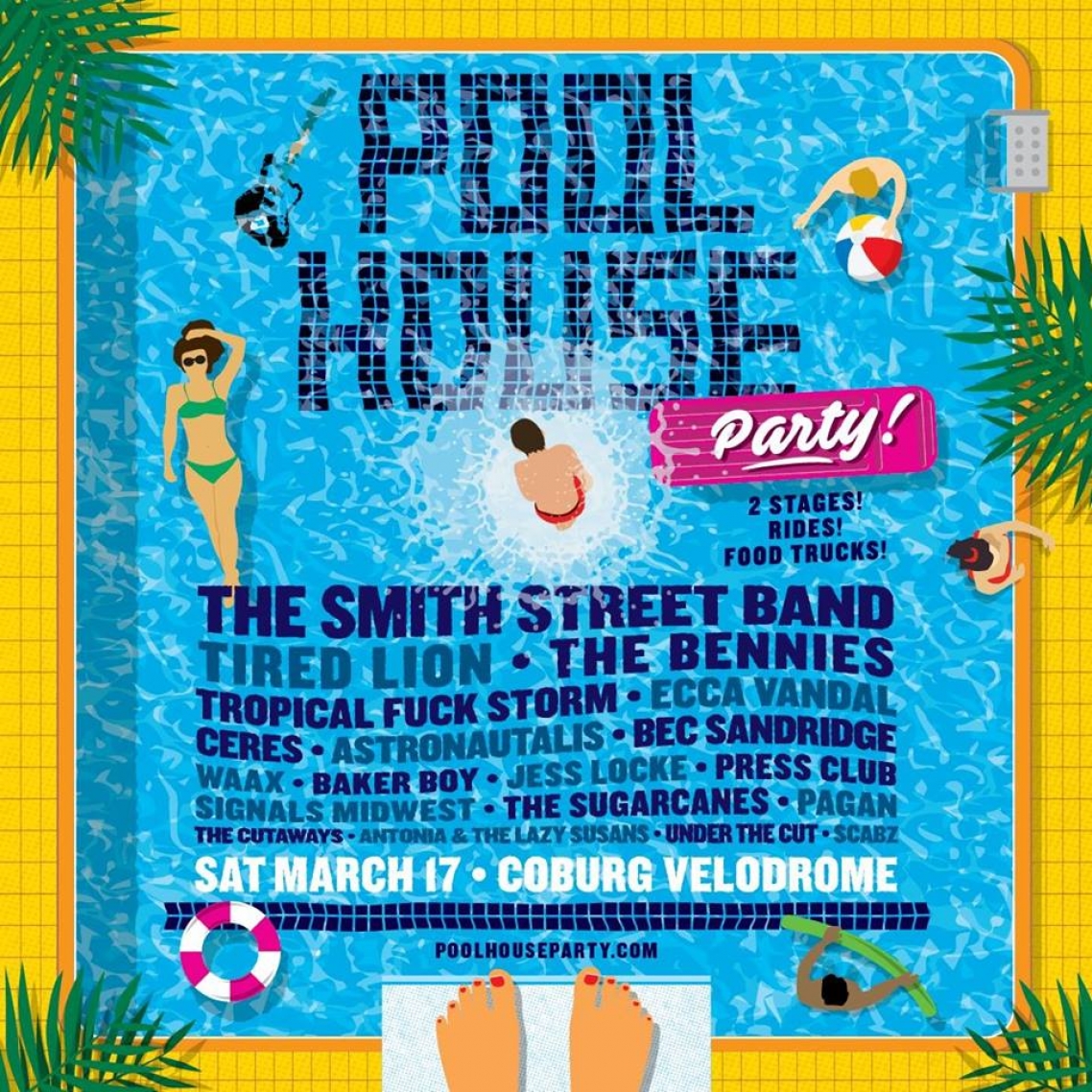 For a limited time, you'll save $14.95 on your first The Smith Street Band, Tired Lion, The Bennies - Pool House Party ticket. There's also no booking fees and tickts for all events are always below RRP. 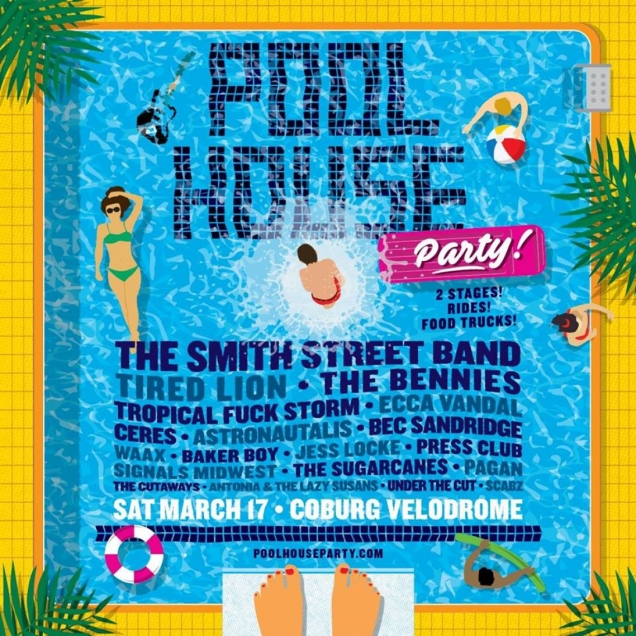 Saturday, 17th March 2018 - 11:00AM
Coburg Velodrome
Coburg Velodrome, Charles Street, Coburg North VIC, Australia
Headliner: The Smith Street Band, Tired Lion, The Bennies
Supports: TROPICAL FUCK STORM, ECCA VANDAL, CERES, ASTRONAUTALIS, BEC SANDRIDGE, WAAX, BAKER BOY, JESS LOCKE , PRESS CLUB, SIGNALS MIDWEST, THE SUGARCANES, PAGAN, ANTONIA &amp;amp;amp;amp;amp;amp; THE LAZY SUSANS, UNDER THE CUT, SCABZ Late last year The Smith Street Band announced the inaugural Pool House Party set to take over two stages at Coburg Velodrome on March 17th. Today The Smith Street Band share with you a bunch of their favourite bands that will join them for the festivities. First up, Gareth Liddiard’s latest project, Tropical Fuck Storm, which also features Fiona Kitschin (from Australia’s epic art punk psych maniacs The Drones), along with High Tension’s Lauren Hammel and Erica Dunn from Harmony. Since forming last year TFS have released a string of 7” and toured America with King Gizz. Long time pals Ceres toured Australia with The Smith Street Band in 2017 and collaborated with Wil Wagner on recent single ‘Stretch Ur Skin’, and March will see the two bands reunited at Pool House Party. Nomadic pop/punk logomaniac Bec Sandridge is also headed along for the ride. Sandridge recently released her new, unapologetic, single ‘I’ll Never Want A BF’ and with more new music on the way expect big things from her in 2018. Kicking off 2018 in a big way, WAAX are supporting Fall Out Boy on their stadium tour, before heading to Melbourne for Pool House Party! Fusing together traditional Yolngu Matha language, culture hip hop and epic dance moves, Baker Boy is also headed to the Velodrome after wrapping up a support spot with 50 Cent (Huge!). We also welcome Pool House Records label mate Jess Locke to the line up. Locke’s 2017 album Universe landed triple j Feature Album and wound up in many a year’s end best of album lists. Pool House Party will see Jess on double duties, also playing with The Smith Street Band. They sprung on to the scene in 2017 with their debut single ‘Headwreck’ and since then Melbourne’s Press Club have been touring constantly and played some of Australia’s best festivals, and we’re stoked to have them join us on Pool House Party. The Sugarcanes, fronted by Lucy Wilson (who you will also catch on stage with The Smith Street Band) call themselves a love band, they’ll bring the low down take on southern soul to the party. And rounding out the epic first announce are Antonia & The Lazy Susans. Since the release of their debut EP only a few months ago they have toured Australia with AJJ (fka Andrew Jackson Jihad) and toured nationally with the Sad Grrls Fest. Stay tuned for another announcement coming soon! Tickets are on sale now. Whilst there is no pool there will be rides, your favourite food trucks and non stop music all day.
image('homepage'))?> title?> id ?>