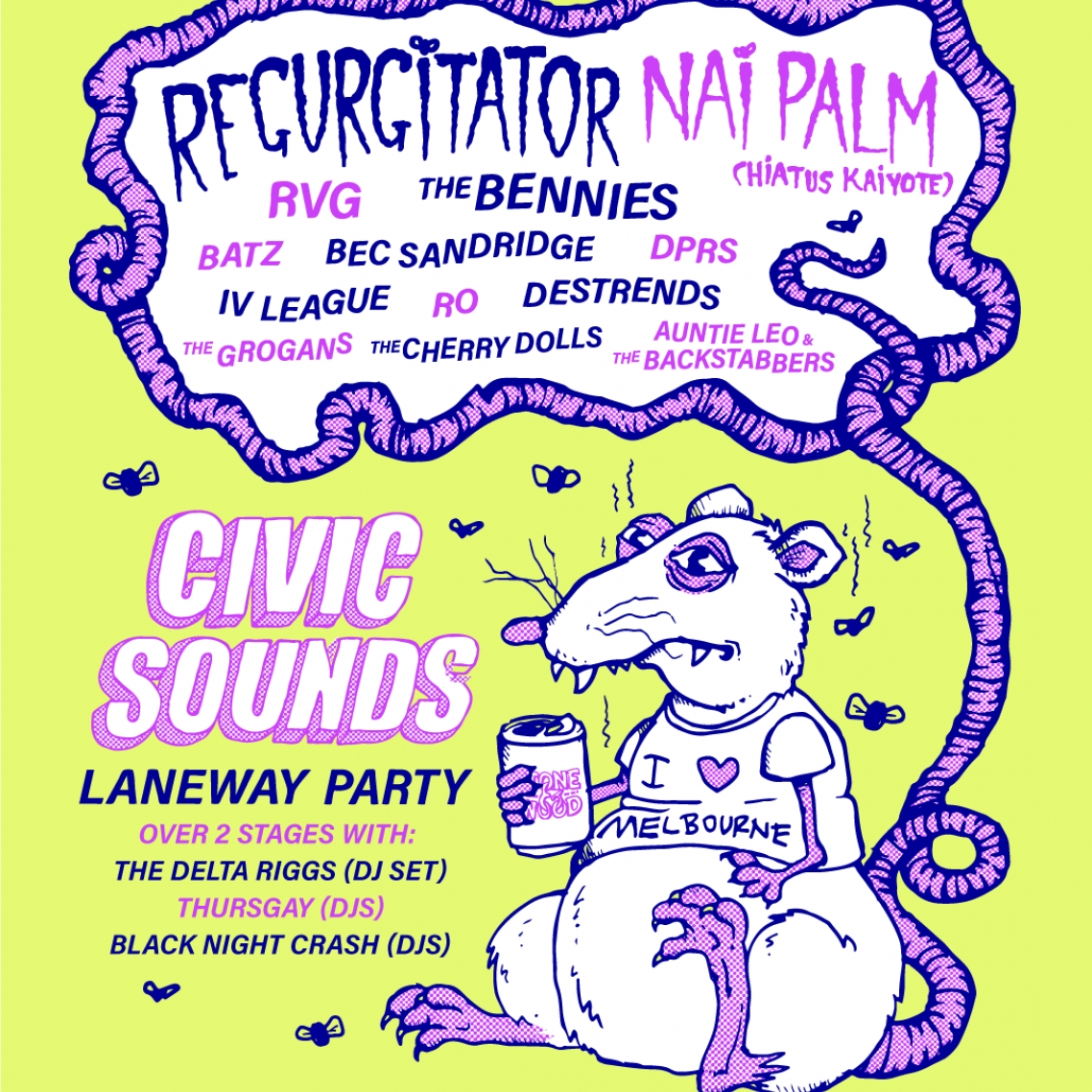 For a limited time, you'll save $14.95 on your first Civic Sounds Laneway Party ticket. There's also no booking fees and tickts for all events are always below RRP. 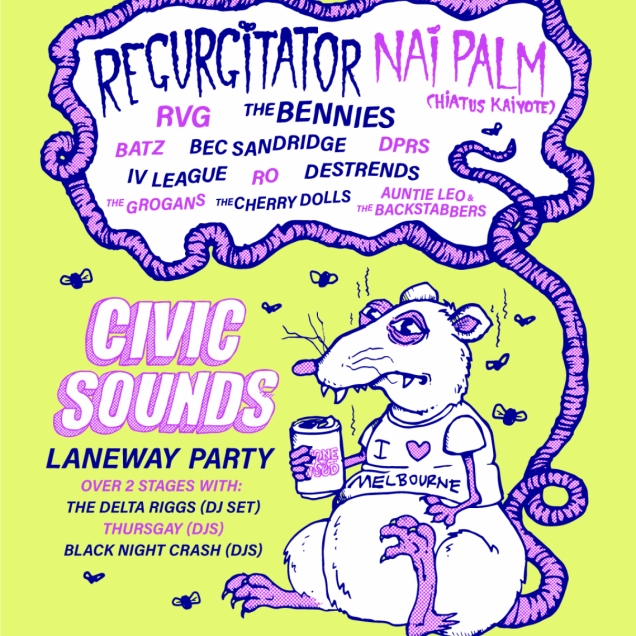 Sunday, 18th November 2018 - 12:00PM
Cherry Bar
Cherry Bar, AC/DC Lane, Melbourne VIC, Australia
Headliner: Regurgitator, Nai Palm, RVG & The Bennies
Supports: BEC SANDRIDGE, IV League, RO, BATZ, Destrends, DPRS - Democratic People&amp;#039;s Republic of Surf , The Cherry Dolls, Auntie Leo &amp;amp; The Backstabbers, The Grogans Melbourne’s laneway culture is getting amped up and loud for one night only on Sunday 18 November as part of the Melbourne Music Week, when AC/DC Lane will play host to the first Civic Sounds laneway festival. Set in the heart of the city with Melbourne’s skyline as the backdrop, AC/DC Lane and on the Cherry Bar stage, the CBD is set come alive for the inaugural event for a memorable day and night with some of Australia’s most loved established and up and coming artists including Regurgitator, Nai Palm, RVG, The Bennies, BEC SANDRIDGE, IV League, Ro, BATZ, Destrends and DPRS - Democratic People’s Republic of Surf + DJs, The Grogans, Cherry Dolls & Auntie Leo & The Backstabbers and food vendors still to be announced. Continuing to push boundaries, whether by blending everything from techno-surf-rock-dub-hip hop and electro-pop to broadcasting their recording sessions from a glass box in Federation Square, ARIA award winning alt-electronica group Regurgitator never disappoint. Joining “The Gurg” is the two-time Grammy-nominated singer, songwriter, musician, and Hiatus Kaiyote’s frontwoman Nai Palm, will captivate audiences with her solo show performing tracks from her minimalist debut album Needle Paw, proving why she’s one of Australia’s top composers, instrumentalists, vocalists and is not to be missed. If jangly guitars are your thing, RVG are back on Australian soil after wowing audiences across North America, the UK and Europe for most of this year. RVG will bring their infectious, post-punk tinged hooks with their intimate, grand, timely and timeless tracks from their highly debut A Quality of Mercy. Bringing the party is fun loving punk-ska-party band The Bennies with their trademark sense of humour and tracks from new album Natural Born Chillers, whilst Bec Sandridge will be coming in hot off the back of touring her recent, brooding art-pop single in ‘Animal’. Representing the groundswell of up and comers are IV League, Ro, Batz, Destrends and DPRS (Democratic People’s Republic of Surf) kicking off the day and reminding us why Melbourne is the music capital of Australia. With early bird tickets now on sale, be sure to grab them quickly to become part of Melbourne’s thriving music community for this year’s Melbourne Music Week.

Sign up below for your
Civic Sounds Laneway Party ticket(s)