Monday blues around Australia have certainly been cured with the massive lineup Falls Festival dropped this morning. Boasting an incredible reel of local and international talent, this will be an undeniably wonderful way to spend New Years!

Australia’s favourite Brits, Alt-J will be over here for the first time since Splendour 2013. You can expect to hear tracks from their forthcoming album This Is All Yours as well as much-loved favourites Breezeblocks, Tessellate and Fitzpleasure. If you haven’t caught them on previous Australian visits, now is the time to do so!

This will be one of your last chances to see Australia’s own class clowns Bluejuice, after announcing they will be sadly calling it quits at the end of the year. Over a decade of bringing us an endless amount of laughs and entertainment, these boys will be saying farewell very soon. Performing at Falls is definitely a perfect send-off that you simply can’t miss.

After releasing their album ZABA and having a majorly successful run of debut shows in Australia earlier this year, Psychedelic indie-pop group Glass Animals will be gracing our shores for their second time. Mostly renowned for their tracks like Gooey and Pools, you may remember hearing them on Triple J’s Like A Version covering Kanye West’s Love Lockdown a few months ago.

After breaking into the scene earlier in the year with massive hit Delete, Sydney dudes DMA’s have been on a whirlwhind of shows all around the country. Also included in the lineup are pals Sticky Fingers who will undoubtedly be bringing bucketloads of psych-reggae vibes.

The Australian music scene is stronger than it’s ever been; in saying this, it’s no surprise that we can expect great local talent including The Presets, Client Liasion, SAFIA, Alison Wonderland and The Kite String Tangle.

We couldn’t be any more proud of the success that Melbourne’s sweetheart James Keough, aka Vance Joy, has received over the last year. Since snagging #1 on Triple J’s Hottest 100 2013, nothing but great things have come from this dude. Riptide was awarded ‘Song of the Year’ at the APRA Awards 2014 and we’re looking forward to his new album after the release of his latest single Mess is Mine.

Milky Chance are producing some of the coolest music we’ve seen come out of Germany for quite a while and will be playing at Falls for their debut Australian tour. Collaborating folk and reggae with a touch of electronica, their tracks including Stolen Dance are something that will have you up and grooving to like a maniac.

International force-to-be-reckoned with Röyksopp and Robyn released a mini-album earlier this year which saw Do It Again become a world-wide dancefloor anthem. Since the release, chatter about a possible tour was circulating and it looks like we’ve gotten lucky! With a time-slot of 2 hours, you can expect nothing less than mesmerising dance-pop splendour!

Boogie Nights will see legendary ‘Queens of Hip-Hop’ Salt-N-Pepa hit the stage. Seriously though, when in your life would you ever expect the chance to see SNP!? Time to practice your shimmy and expect to see the entire stage transform into a 90’s disco dancefloor.

+ More to be announced

Register in the ticket ballot here for your chance to snap up your ticket! 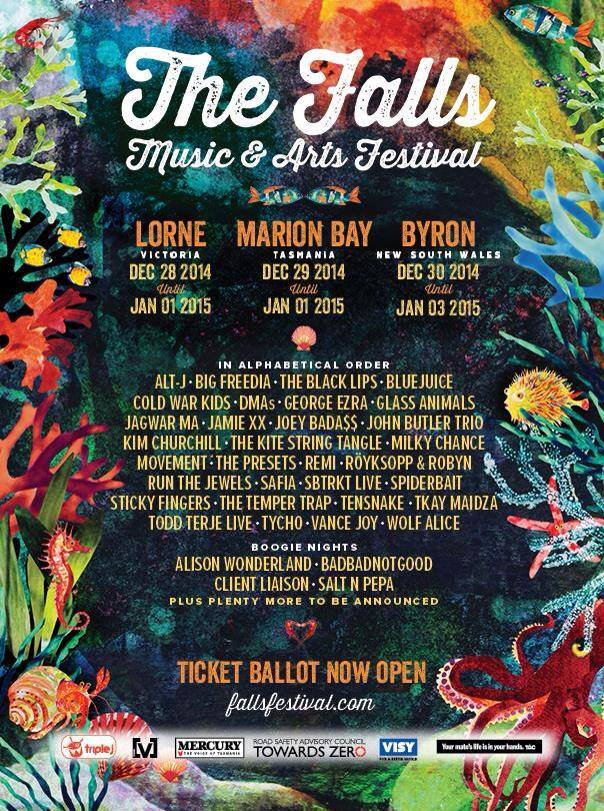 I originally wrote this for Scenewave

Forgot to make plans this long weekend? Get your tickets sorted for these events ASAP.

Our top 6 festival picks for this summer

Scalping scam: how to avoid falling victim this gig season